From rockers on the Kiez to hipsters in Schanze and sailing loafer wearers on the Alster: Let’s face it, there are a lot of stereotypes around and about Hamburg too. And these are exactly who we’d like to present to you in our new column "Typically Hamburg". Although they’re all very different, “Hamburgers” have at least two things in common: their love for Hamburg and for hvv switch.

Working together with the illustrator Diana Köhne, we’ve come up with some affectionately designed Hamburg characters and set a unique stage for them here.

Punk is not dead! 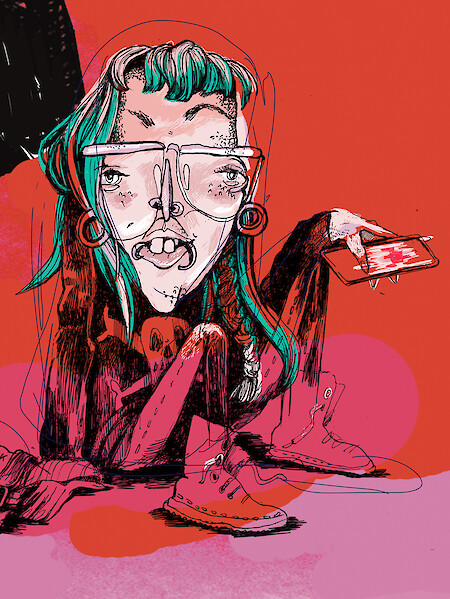 Nisi is 20 to 30 years old, and her uniform of choice is a black hoodie, Doc Martens and a black army bag. Dyed hair completes the look. She’s totally left-wing. Sometimes only to make sure she’s right. She always has her Edding pen with her, and invariably some Antifa stickers too.

Walking through the consumerism hell of Mönckebergstrasse makes “No Future Nisi” feel sick. All these system-conforming bourgeois zombies who don’t see the injustice even when they’re being gentrified out of their own apartment. That’s why she lives with her “Action Anti” friends in a kind of commune set-up in a squat in Wilhelmsburg. Freedom is something you have to fight for! Sometimes she hangs around with her mate in front of the Edeka supermarket asking passersby for small change. But in the evening she heads back to her mum and dad’s house. Even though she goes, she is still against the system. She is trying to save Hambach Forest. And the whales. Plastic is a complete no-go for her. She’s still a student. Perhaps even of Law.

Thanks to the hvv switch app, she can now at least organise how she travels around more freely. Do you have someone in your friendship group who’s a die-hard freedom fighter? 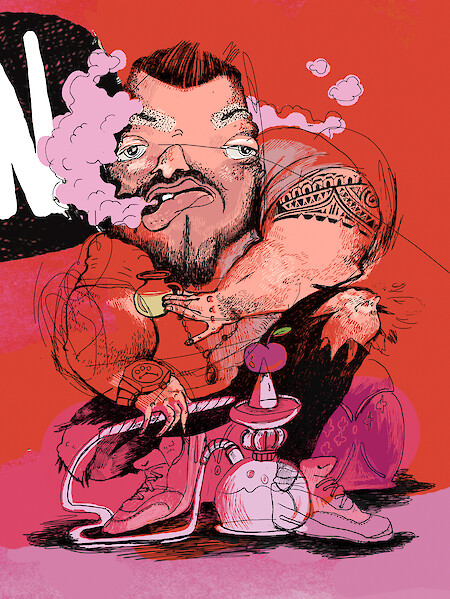 20 to 30 years old. Usually goes by the name Dustin. Or something like that. When Dustin wears jeans, they’re black and tight, with holes that are way too big. It’s in right now. He saw it in a music video. He takes his looks very seriously. Perhaps a bit too much, in fact. But he’s a gangster, of course. Most of all he’d love to have celebrity status. But he only has 347 followers on Snapchat. He spends his days doing this and that, passing the time before he gets famous.

If Covid hadn’t come along, Dustin would have been the main attraction at the shisha café with his thick shaven neck and tight shirt showing off his muscles. Then he’d head to Jungfernstieg to catch up with his homies over shisha in their local hookah lounge – just like on any other Saturday.

Right now, with the pandemic, the double apple session has been relocated to the living room and the chat switched from real life to FaceTime. Modus Mio is usually playing on Spotify. The shisha guy washes away all doubts about whether Jacqui is into the “Fitti” guy Mehmet with a big gulp of Moroccan mint. Likes wearing a Gucci belt bag, Adidas sweatpants and a Burberry cap. And soon he’ll most likely be back pumping at McFit, or out and about with his cousins.

Have you got a Dustin in your group of friends too?

Our beloved pensioner or grandma 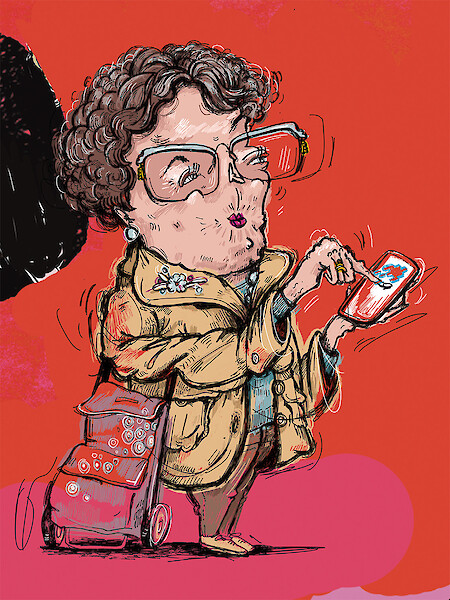 Somewhere between 60 and 70 years old. She uses hvv switch, for instance, whenever she pays a visit to the hairdresser. Nobody’s as good as her Michael at getting her blow dry and colour just right! And on Mondays she uses the app to make her way to her favourite café in the centre city to meet her girlfriends for a natter. She also likes going to weekly markets. Of course, she wouldn’t dream of leaving the house without full make-up on. And she always has her pull-along trolley with her whenever she hits the shops.

Her children and grandchildren are always teaching her new things about her mobile, but generally speaking she is a little wary about anything new that comes her way. Her family often don’t know whether to laugh or cry about some of the things she gets up to with her phone. Especially in the family whatsapp group. One thing did impress her grandkids though: She was the first one in the whole family to install the hvv switch app!

But there are other things about grandma that never cease to amaze. Where does she manage to find all those beige coats? And where does she get those light-brown trousers, shoes and bags, and everything else in all shades of beige?

We all know one: The ad man.

Somewhere between 45 to 60 years old. He’s an advertiser by trade. Or, at least, but he works in publishing or owns a gallery. Slim, good-looking, vain, fashion-conscious. Wears a pair of black “editor’s” glasses and is always dressed in “casual chic”. New Balance sneakers. Trousers just that little bit too tight. Grey hair. But always styled in a young, fresh and dynamic way.

Of course, he’s always been an Apple user, even right back in the Stone Age. He set up his own business a long time ago and has long since earned a lot of money. Enjoys reading the arts supplement of the newspaper while sipping on a latte macchiato in his favourite café. Actually, he thinks cars are pretty boring and a bit old-fashioned in a way. The one exception: his vintage Porsche. He goes jogging around the Alster lake to keep fit.

He often uses hvv switch to book a MOIA. For instance, the other day after a debate about the future of influencer marketing in the coworking space. Unfortunately, the short drive to dinner in Schanze with copywriting partner Uwe wasn’t enough to convince the MOIA driver to create a social media profile. Oh well, maybe next time.

May we introduce? The Hanseatic Lady. 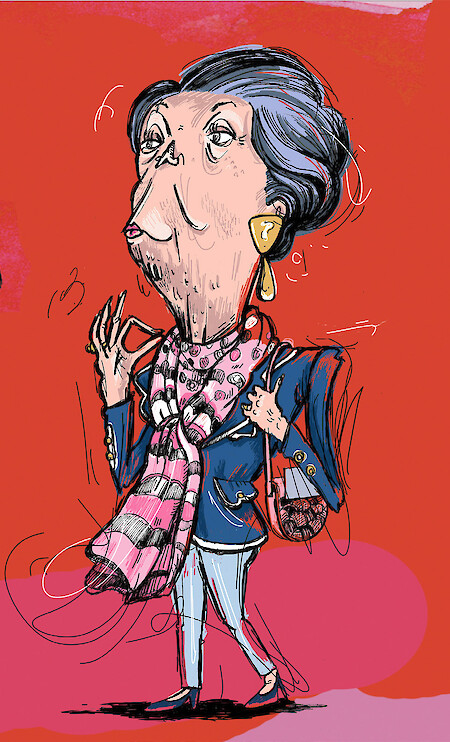 She uses the app to buy her 9:00 a.m. Day Ticket and, after a tennis lesson at her club on the Alster, she travels on the U1 over to Jungfernstieg. She meets up there with her friend Birgit for a porcini risotto lunch in the Bank restaurant, and a short browse inside the Unger boutique nearby.

For her, the train is a quick and convenient alternative to driving – and with the chronic lack of parking spaces, her car has never actually found itself parked in one to date.

She's 50 to 70 years young, of course. A Hanseatic lady born and bred. Well-to-do. Slim-figured. With an eye for fine fashion details.

Comes from a rich merchant family and is a successful businesswoman herself. She cuts a fine figure, whether she’s on a beach stroll, sat in a café, or negotiating in the boardroom. Almost always wears a business suit. Nordic understatement despite her wealth.

In her spare time she likes to go for walks. Or watch a polo match. She always has just the right scarf to match the rest of her outfit. Always the right gloves and, without fail, the right glasses and handbag.

Shopping? Yes, but only on Hamburg’s Poststrasse. Her husband is a shipowner. She doesn’t often laugh. After all, humour is also a form of intelligence. Wouldn’t you say?

"Music is a central part of our life!"

One app. One service.

Contact our service team if you have any question.

It's just a straw

We have always shared the city with everyone

Freedom is the most important thing for me

Why the tariff zones are the way they are

Because quite simply: the more diversity the better

You have to listen to your heart, and follow your goals and dreams.

Decisions are coming out of my belly. My head needs to chase.

"Consequent and authentic. That's it"

The best of two Worlds

One app. Two apps! What now?

All of us can fall. But you have to learn to get straight back up again.

"Never give up! Always keep fighting!"

Movement is driven from inside us

Do whatever moves you. Move the world around you

taking care for each other

Information about how best to act around others

Look out for one another

What will happen to switchh?