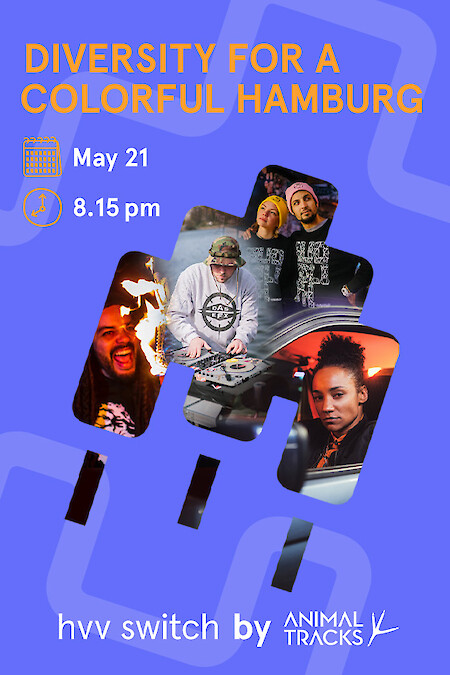 Diversity is not only an essential part of the kind of mobility that hvv switch will offer in the long term. It’s also an important source of social and cultural inspiration, and a driving force in society.

We embrace diversity through artists’ voices. There are people from all different cultures, with all different beliefs, and of all age groups living in and around Hamburg. Left-handed and right-handed people, with different gender identities and sexual orientations. Both with and without disabilities. So that’s our way of speaking out together against discrimination of any kind. Because it’s respect that we believe in. Respect is the only way we can all move forward together.

We continued our livestream series that kicked off in November 2020 with KoweSix (Moonbootica) and fritz kola on a HADAG ferry. Back then, we reached out for support from the Hamburg club scene. With our last concert we've thrown the spotlight on two completely different projects:

Rap for Refugees is an initiative aimed at fostering integration and giving strength of character to young people who’ve faced tough situations in life. It’s also for anyone interested in its workshops and the joint creative process. RfR uses the art form “rap” to reach out to young people and give them tools to express themselves and have a creative outlet. Alongside the workshops, RfR’s work focuses on creating platforms where young people can perform what they’ve learnt.

The Hacker School was founded to get children and young people excited about computer programming. Through its various projects, they’ve remained steadfast in their goal of making sure that every single child in Germany – regardless of their gender or background – has programmed at least once to get an idea of what it’s like to help shape the digital world. By getting companies, schools, networks and politics involved, they make this goal the joint responsibility of our wider society and aim to achieve more this way.

Thanks to the partnership with Animal Tracks, we have many friends in the arts and music scene. Right now, it’s hard to stage anything, and direct dialogue is really tricky. That’s why we organised this livestream together. If people can’t go to concerts, hvv switch and Animal Tracks have decided to bring the concert to the people. We bring faces, voices and expression to the diversity that exists in Hamburg. And take a clear stance in standing up for and promoting diversity. We’re here to serve everyone and always strive to make sure everyone is treated equally and has the same opportunities.

In collaboration with Animal Tracks and the following artists, and in the name of diversity for Hamburg, we’ve put together an exciting line-up for you:

We also managed to get Buddy Buxbaum aka HOLO Rec on board, who has produced a track especially for this concert that was performed at the end by all the artists in the line-up. The livestream was be presented by Jannes Vahl of clubkinder e.V. The concert was held on 21 May 2021 at i-Punkt Skateland and the livestream went out at 8:15 p.m. on Facebook, YouTube and Vimeo.

Our streaming partners were:

Do whatever moves you. Move the world around you.

Moving from switchh to hvv switch.

What will happen to switchh?

Move differently for a change.