We caught up with Lars and Kai Zimmermann, the minds behind “CITIES FOR FUTURE” ­– an interdisciplinary team that combines architecture, economic science and urban planning expertise in smart ways. To come up with climate-neutral designs bringing greater quality of life to cities and regions. The mission is clear – and ambitious. It is nothing less than regaining control of urban spaces for the people.

hvv switch: What were your reasons for founding “CITIES FOR FUTURE”?

Lars: There was a real eureka moment – that was my return from Holland back to Germany. After graduating in Architecture and spending almost ten years abroad, it was like travelling back in time for me. How we use space, how we move around, the entire feel of a city is still dominated here by the automobile. I felt like I’d been taken back 30 or 40 years.

Kai: “CITIES FOR FUTURE” is about more than a new approach to mobility though. Cities are viewed as an integral whole with all their players – from citizens to trade, the economy and logistics, in order to redesign public spaces in a sustainable way.

hvv switch: What are the historic reasons for this development?

Kai: Like many cities in Germany, Hamburg carries a heavy burden – the destruction of the city on two separate occasions. From the bombs during the air raids in WW2, followed by the wrecking balls of the 1950s and 1960s. The “American Way of Drive” was firmly established here in Germany. All urban and demolition planning was focused around one single parameter – automobility. The result is a dissected urban environment, lots of badly built-up areas, and little space for living. It is an asphalt legacy that we can only overcome gradually, step by step.

hvv switch: What are the master plans for bringing a great quality of life to cities in the future?

Kai: The development of the city and mobility goes hand in hand. Concepts such as a city with short routes, the so-called “15 Minuten Stadt”, provide some good starting points. Public transport has a key role to play here. Barrier-free, as straightforward to use as possible, with modes of transport and a stationary infrastructure that are enjoyable to use too. Multi-modal, designed for all genders and generations: these are important parameters for us in our ongoing development work.

hvv switch: When does the future begin, for us? 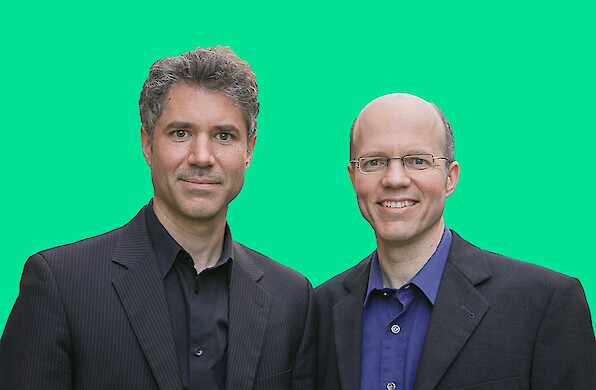 Kai: We don’t need to wait for any technological innovations before we begin redesigning mobility in a forward-thinking way. Take flying taxis. They might be lots of things, but certainly not the answer to the dead end we’ve run into with our on-the-ground transport. With specific and clearly envisioned interventions in urban spaces, new worlds and possibilities can be opened up right now. This includes, in Hamburg for instance, the central car-free area around Jungfernstieg, the very appealing bicycle-only roads on the Alster Lake, the “freiRaum Ottensen” initiative, and the “Superbüttel” concept in the Eimsbüttel neighbourhood – inspired by the superblocks in Barcelona.

Lars: The fact that it brings concepts to life. Visualisations and renderings coming alive in real life really sharpen people’s awareness. They provide a showcase and references for us to rewire our way of thinking. With Superbüttel we show in a real way that there are alternative ways of doing things.

The future of mobility is becoming visible.

Roads are public spaces that are available to everyone. But these days they’ve just become one giant car park. For cars that spend 23 hours a day on average standing around unused. Together with the initiative KURS FAHRRADSTADT, we are in the process of transforming Eimsbüttel into one vast open-air living room. The community of residents gets to enjoy an upgrade and the quality of life will be improved substantially. Key criteria for this include more greenery and recreational areas, the minimizing of through traffic with the help of one-way traffic regulations, a speed reduction to 10km/h, and sharing and mobility stations like hvv switch.

hvv switch: A change in mobility in the future is always related to a change in behaviour. In what sort of timeframes do you think our behaviour patterns can change?

Lars: Look at Paris! The city is a real inspiration from a political point of view. The Paris authorities are demonstrating right now just how fast complex transformation processes can be realised, provided the political will is there.

Kai: The mayor Anne Hidalgo transformed the city into a 30 km/h zone – overnight. Anything is possible. It’s no wonder Canadian political scientist Benjamin Barber came up with the smart credo: “Let mayors rule the world”. At least here in Hamburg we have a senator dedicated solely to the issue of future mobility. That is a statement in itself.

hvv switch: For the “Ideenzug” you had looked at interior design concepts. Which architectural innovations would you like to see for the public transport system in Hamburg?

Kai: The “Hamburg Takt” initiative is going to reduce waiting times to a minimum in any case – but we still believe that the stations and their many waiting rooms can be made more attractive and used in more intelligent ways. In the Netherlands, for instance, there are pianos in lots of stations, inviting anyone to play who wants to. In London there are stage areas especially for street artists and up-and-coming bands, and in Seoul there are dedicated areas for vertical farming. There is no limit to the imagination when it comes to temporary uses. Time for an ideas contest, don’t you think?

These contents could also be interesting for you

Freed No 2: Be nice to each other!

Freed No 2: Be nice to each other

Smart and easy all over the map.

Towards an emission-free bus fleet.

Your questions. Our answers – Electric busses.

Why it’s worth switching to an e-scooter now

Single-use is such a waste.

Anthems for the pitch

Live life to the fullest

“I want to help people because I like to see them happy.”

“Football has given me a lot and taught me a ton of things for my life.”

“What matters is living life as a community!”

Football has given me a lot and taught me a ton of things for my life.

The portrait as a version for visually impaired people.

Freedom for me is the democracy we have in this country.

“We’re still too well off.”

Age is a form of freedom. Look forward to it.

“Freedom of movement comes from within.”

“Music is a central part of our life!”

Decisions are coming out of my belly. My head needs to chase.

“Consequent and authentic. That’s it.”

We have always shared the city with everyone

“Freedom is the most important thing for me.”

You have to listen to your heart, and follow your goals and dreams.

All of us can fall. But you have to learn to get straight back up again.

“Never give up! Always keep fighting!”

How many streets there are in this city?

How long one must tread to have walked them all?

Do whatever moves you. Move the world around you.

Move differently for a change.